In 2013, the Independence Bowl Foundation established the Charitable Donation Program, which will provide money to area non-profit organizations each year. 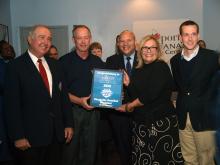 The Independence Bowl Foundation will annually take $0.50 from each ticket sold to the bowl game (including team allotments) and will split that money up equally and distribute it to the two charitable organizations that have been selected for that year.

The program is designed to enhance efforts by local non-profit organizations to fill identifiable areas of need within the community.

Awards will be distributed via Give for Good in 2016. Recipients of funding will be required to file a follow-up report by September 1, 2016, providing information on the accomplishments of the project, how the funds were spent, how the Camping World Independence Bowl was involved and was recognized.

Minimum guaranteed amount to be awarded per group: $5,000 (The final amount will be based on total tickets sales for the 2015 Camping World Independence Bowl – as $.50 from each ticket sold goes toward the award.) Applicants must be a 501(C)3 organization and must provide supporting documentation.